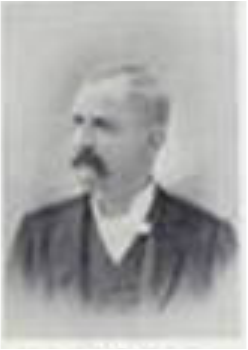 Captain Amos Foster
During the Civil War, Captain Amos Palmer Foster had a humorous experience with President Abraham Lincoln and a serious one with Admiral David Porter of the United States Navy. Amos Foster who would later become a noted Great lakes captain was born in Brooklyn, New York in 1834 and absorbed the sea into his blood at an early age. He attended school in Brooklyn and later was a pupil at the North River Military Academy. He passed the examination for admission to the Naval Academy at Annapolis, but remained there only a short time.

Captain Foster Serves in the Lower Potomac During the Civil War

Amos Palmer Foster began sailing as a boy on a ship in the china trade. In a few years he had worked his way up until he was given command of the Horatio, a full rigged ship which sailed between New York and China.

When the Civil War broke out, Amos Foster offered his services to the United States government and he was appointed acting master in the United States Navy and assigned to duty in the lower Potomac. He commanded the Wyandank, assigned to the Potomac Squadron and later when commanding the Resolute, his job was conveying Union ships past Confederate batteries.

On October 11, 1861, Captain Foster destroyed a Confederate schooner which was carrying guns for a Confederate battery that had sailed up the Potomac River and entered a creek. The official result was that Senator Edgar Cowan of Pennsylvania offered a resolution expressing a vote of thanks from Congress to Captain Foster.

Captain Foster’s next adventure happened early in April 1865. The Commodore Perry lay in the James River, about half mile above the Dutch Gap Canal. The Union lines surrounding Lee’s Army were being drawn tighter and closer and the final blow against the Confederacy was about to fall. Suddenly the Captain heard the sound of heavy firing from the direction of Richmond.

Captain Foster at once went ashore in his gig and climbed to the top of the “Old Crow nest” signal tower. From there he had an excellent view from miles around. In about an hour he came back aboard the Commodore Perry. In a few minutes the flagship signaled the Commodore Perry. The message read:  “Get underway. Take the lead to Richmond. Be very careful of torpedoes.”

Captain Foster weighed anchor and the Commodore Perry began to steam up the James River. The crew destroyed about 51 torpedoes, which enabled the rest of the Union fleet to come up the river with little difficulty or danger. When the Commodore Perry reached Fort Darling, she ran aground on the obstruction placed across the river. Captain Foster ordered his chief engineer to pay no attention to the engine bells, but instead forced the ship forward and backward as hard as possible until she was worked off.

While Captain Foster grappled with his mini-sand bar, the United States steamship Malvern, Admiral David Porter’s flagship with President Lincoln aboard, came up astern of the Commodore Perry. It was impossible for the Admiral’s ship to pass the Commodore Perry because of the narrowness of the river at that point. President Lincoln and Admiral Porter had to resume their trip to Richmond on the Admiral’s barge.

As the men attempted to force the barge through the narrow passage, it was caught close to the Commodore Perry’s immense paddle wheel, and the engineer, not being aware of what had happened, began turning the wheel over. President Lincoln, the Admiral, and the crew of the barge shouted and Captain Foster, remembering his instructions to his engineer, ran to the engine room hatch and called to the engineer to stop. The immense wheel was stopped just in time, for one more half turn would have resulted in the injury and possible deaths of all of the people on board Admiral Porter’s barge.

Admiral David Porter ordered Captain Amos Foster not to proceed to Richmond, but to anchor and allow all of the other vessels to go up the James River in front of him. Captain Foster obeyed and the barge carrying Admiral Porter and President Lincoln sailed up the James River toward Richmond. After the barge had passed, tugs dragged the Commodore Perry head first through the obstructions and continued on the journey up the James toward Richmond. The Commodore Perry was the first ship bearing national colors to drop anchor before Richmond.

A few hours later, Admiral David Porter’s flag ship, the Malvern, dropped anchor near the Commodore Perry and during the evening President Lincoln and Admiral Porter reboarded her. For Captain Amos Foster, the greatest ordeal of the whole campaign was about to begin. Duty compelled him to go on board the flagship, Malvern, and report the presence of the Commodore Perry to Admiral Porter. Captain Foster rowed over to the Malvern and entered the cabin. Here he found President Lincoln and Admiral Porter sitting and talking. Saluting, Captain Foster announced the arrival of the United States Steamship Commodore Perry at Richmond.

According to the version of the story in History of the Great Lakes, Admiral Porter said to Captain Foster in a very stern voice, “Captain Foster, I thought I told you not to come up to Richmond.”

“Sir, I did not understand you so. I thought you told me that when I backed off not to attempt to come up here,” Captain Foster said.

“Well, what of it?” Admiral Porter demanded.

Captain Amos Foster replied in the same measured accents he had used during the entire conversation. “Sir, I did not back off. I ran her over, bow first.”

Admiral Porter turned many shades of red, but before he could say anything, President Lincoln saw the joke and threw back his head and laughed. Still laughing, he stood up and offered his hearty congratulations to Captain Foster.

Admiral Porter’s color returned to normal, and he, too, got to his feet. He said, “Sir, you can now go aboard your vessel. I will see you concerning this matter in the morning.”

Much to his relief, that was the last that Captain Foster heard from Admiral David Porter.

After the Civil War ended, Captain Foster resigned from the Navy and went into mercantile pursuits until 1891, when he began to work for the United States government as a captain of the lighthouse steamer Dahlia. From 1891 to 1895, he remained in the light house engineer’s office and in 1895, he commanded the light house boat Warrington. He finished out his maritime career on the Great Lakes, but his warmest memory and his best sea story was the yarn about the time that he met Admiral Porter and got to Richmond ahead of him.

Captain Foster kept the flag that the Commodore Perry flew the day that he bested Admiral Porter and made President Abraham Lincoln laugh, and he cherished it for the rest of his days.

Anderson, Bern. By Sea and by River:  Naval History of the Civil War. Da Capo Press, 1989.