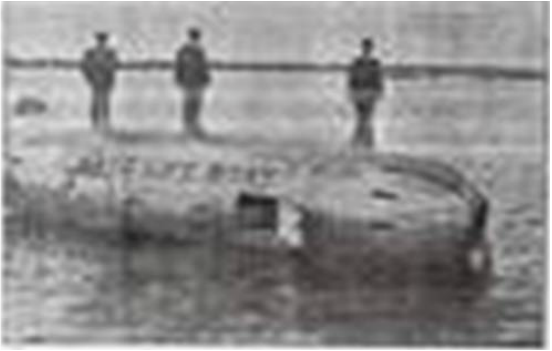 As a member of the Life Saving Station at Frankfort, Michigan, Captain Robert Diamond Mayo had to use the materials at hand and his experience and resourcefulness to save lives. He passed this creativity and resourcefulness down to his sons and daughters. According to the 1900 Census, Robert Diamond Mayo, Sr.,44, his wife, Agnes, 42, and their sons William 24, Robert Jr., 17, and daughters Mina, 22, Alice, 11, and Edith, 8, lived in Frankfort Village near Crystal Lake in northern Michigan.

Captain Mayo Develops a New Kind of LifeboatCaptain Robert Mayo and his sons William and Robert dreamed of a new kind of lifeboat that would help Great Lakes mariners, their crews, and passengers survive the swift and deadly shipwrecks that happened regularly on the Great Lakes in the 19th century. Captain Mayo experimented for years to develop a lifeboat that would raise the survival odds for people cast into Great Lakes waters. The final version of his boat won a gold medal at the Panama Exposition of 1901.

A Cone Rounded at Both Ends and a Shell of SteelThe final version of Captain Mayo’s boat was a cigar shaped boat rounded at both ends. The shell of the 20 foot boat was seven feet in diameter and perfectly round and there was no projecting fins or keel to keep the boat in any position in the water. The boat was made up of two shells. The outer shell was of sheet steel and revolved around the inner shell which was weighted so that the passengers were always on an even keel.

He made the shell of three quarters rich oak, covered with a jacket of steel and shaped on strong oak ribs on the inside. The forward and aft ends of the cone were air chambers, made in such a way that crushing or puncturing them was practically impossible.

Around the shell were small openings on which tiny windows of heavy plate glass were set in rubber and steel gaskets. On two sides of the boat were man holes or gangways set in rubber gaskets, and on each side two small port holes large enough to push an oar through. The ports were closed with heavy doors of steel and every opening was closed and locked from the inside of the boat.

Seats for 50 People and Lockers for Food and WaterThe only unprotected openings in the boat were at each end of the cone. The forward end was a manhole large enough to move about in easily, and at the aft of the cone was a smaller opening designed for the lowering of an anchor.

The most interesting part of Captain Mayo’s invention was the inside of the boat. What looked to be a cone with a hole through the middle was a complete boat filled with seats for fifty people, storage lockers that could hold a month’s supply of food and water, a toilet arrangement, and oars and life preservers. The life boat could also be rigged with sails.

Swinging Seats and Water VentsThe seats were arranged on pivots, which allowed them to swing completely around, regardless of the boat’s position. A device locked the swinging seats in position and prevented them from rolling, in case rowing was necessary. An ingeniously arranged light pole could be hoisted and attached so that it was always upright no matter how the ship rolled in the waves.

The end compartments were filled with water vents to prevent them from filling with water, and the entire boat drew only 14 inches of water. There were enough exposed surfaces to allow the wind to drive the boat ashore and it was built to stand severe pounding from the surf.

The story said that Captain R.D. Mayo of the Frankfort Life Saving Station had spent years of quiet labor on his boat and had tested it until he was satisfied it would work. Captain Mayo displayed a model of his boat at the Lake Carriers meeting, and he organized the Rescue Lifeboat Company, with a capitalization of one million dollars.

Muskegon, Michigan’s leading capitalists, including Charles H. Hackley and his financial associates made the preparations for placing the boat in
government hands. The United States, Great Britain, France, Spain, Russia, Japan, Norway, Italy, Sweden, Germany, and Belgium secured patents for the Mayo lifeboat. The backers estimated that the 30 foot boats would cost $400, compared to $150 for ordinary open life boats. Captain Mayo gave a working model to the life saving crew at Frankfort for the most severe tests.

Cruises Across Lake MichiganIn November 1901, Captain Mayo and his crew sailed across Lake Michigan from Muskego to Chicago in rough weather. They arrived safely in Chicago. The New York Times of December 1,901, reported on the Mayo Lifeboat’s return trip and noted that the boat landed at Grand Haven on December 2, 1901 in spite of the towering waves.

A Factory in ToledoOn June 14, 1904, the steamship General Slocum sank in New York’s East River and 1,021 people died. President Theodore Roosevelt called a special meeting of the board of supervising inspectors of steamships to find means of preventing another such disaster. He recommended the Mayo lifeboat and the steamship inspectors approved its manufacture.

Captain Robert Mayo invested between $75,000 and $100,000 to  a factory in Toledo to manufacture his lifeboat which was patented in 1908. World War I and technological advances greatly changed marine technology. Captain Mayo’s lifeboat  became outdated and  he closed down his factory.  But he was an innovator and pioneer and many of his life boat concepts and designs survive in modern submarines and submersibles.